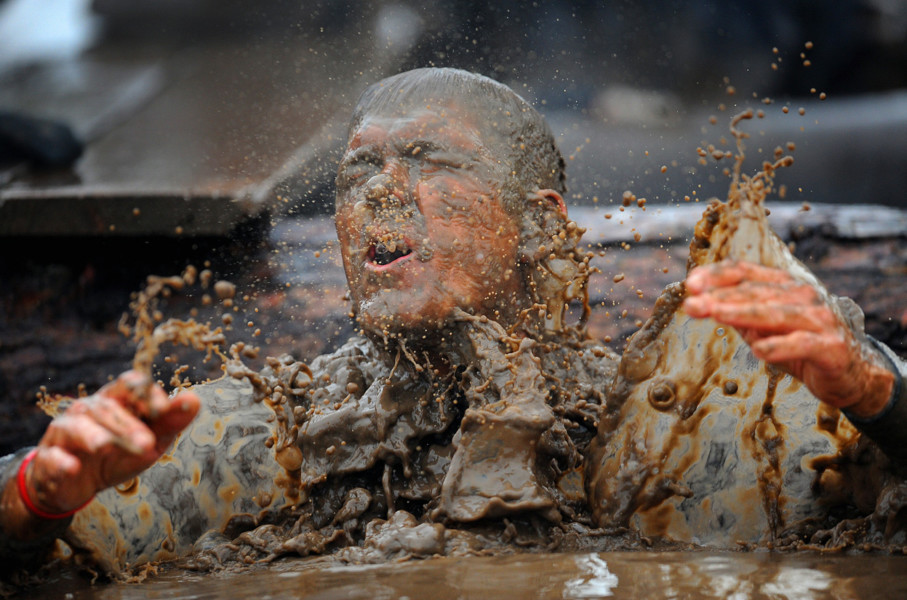 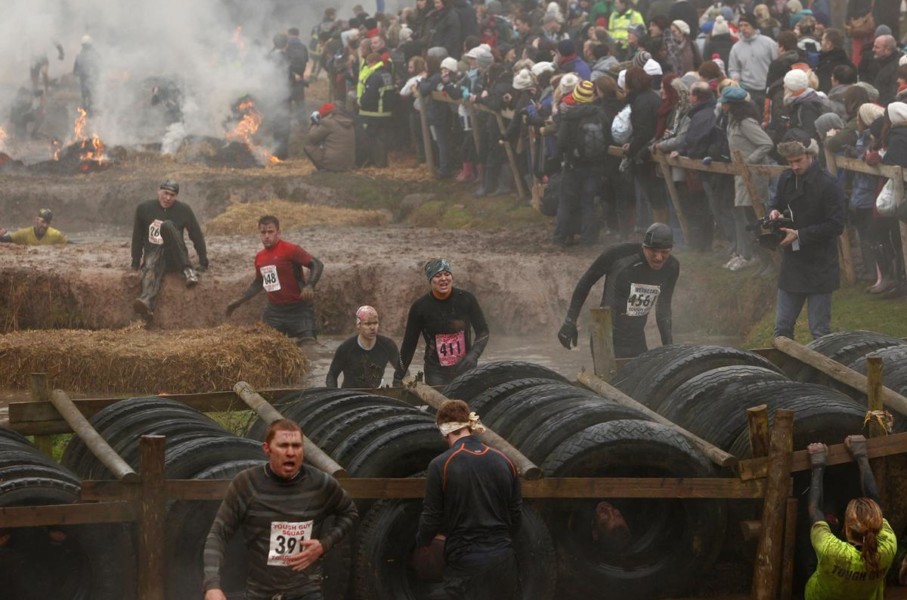 I've heard people make some very interesting noises in races over the last few years. I've listened to the rhythmic wheezing of someone operating way beyond their respiratory capacity in the closing stages of a hilly 10k. I've recognised the teeth-gritted, guttural snarl of a runner coaxing their exhausted legs back into a run after a recuperative walk. I've heard the genuinely chilling scream of a man hitting tarmac at 30mph on the bike section of a triathlon. But the sound of my fellow competitors resurfacing from the icy water into which they had recently plunged will stay with me for a long time: a surreal mixture of panic, shock, authentic pain and naked, visceral fear. Not the fear of losing time or letting someone overtake you; not the fear of injury or defeat; but the spluttering, swearing, wide-eyed need to get the hell out of there.

I think, more than anything, it is fear that Tough Guy trades on. Lots of races can claim to be challenging, exhausting, difficult, intimidating, but Tough Guy makes you do things that your whole body is screaming at you not to do. It makes you challenge that voice inside your head and defeat it. And it is this that keeps people coming back.

Because fear can be an addiction. In our sanitised, secure world, most of us go from day to day without ever experiencing genuine concern for our safety. We never worry about where the next meal is coming from or whether we'll have a roof over our head that night. The incredible rise of the 'sufferfest' phenomenon pays tribute to the idea that many people want a sense of challenge that everyday life doesn't always provide them

It is fear that drove 2000 people to Wolverhampton to hae a crack at the granddaddy of the sufferfests: a 15km assault course that forces you to climb a 40ft cargo net with hands too frozen to grip properly, scramble up (and fall back down) near-vertical mud slopes and throw yourself over and over again into that freezing cold, terror-inducing water.

And I really shouldn't be one of them. I shouldn't really be on this website. I'm not really meant for this kind of thing at all. Outside of the annual school cross-country, I didn't go for a run until I was 27. It's not that I didn't enjoy sport, I just never saw the point of exercise for the sake of it: running only to end up exactly where you started. A chance conversation with a friend and a desire to do something to keep fit in the rugby off-season about six years ago led to me entering a sprint triathlon and things have sort of snowballed from there but I still feel like somewhat of a fraud at these things.

I certainly felt very out of place on Tough Guy's start line. Having wangled myself a media ticket in exchange for the words you are now reading, I was somehow placed in the first wave of competitors. Around me are a collection of extremely lithe, rather serious looking athletes – people who actually look good in lycra – and behind me a baying mob that resembles a stag weekend gone rogue. It's January, it's raining, it's 5°C before the wind chill and the woman to my left is wearing shorts. The man on my right isn't wearing a top. I don't belong here.

But it doesn't take long for me to realise that this isn't going to be like any event I've been in before. For a start, this is a great race for those of us who aren't, shall we say, of a natural running physique. Cramming over 200 obstacles into 15,000 metres doesn't leave much room for extended running sections and even Mo Farrah would struggle to get up a head of steam in the ankle-deep mud that is the running surface for much of the race. In fact, the construction of the course is a great leveller. Rather than watching a procession of skinny, singlet-clad whippets stream past me, as is my usual experience of mass participation running, I find myself reaching down to help pull them out of a muddy ditch. Speed over the flat doesn't count for much when there are 15-foot log fences every 20 yards or that flat ground is covered by chest-deep water. Did I mention the water?This isn't a race about heart rate or VO₂ max, this is a battle between your desire to finish and your desire to give up, go home and get warm. There isn't much of the lung-burning, sweat-pouring exhaustion of a straightforward running race. Rather you find yourself drained by the punishing physicality of the obstacles and the wearing down of your mental reserves as another unspeakable challenge is put before you. No sooner do you finish the 30-foot combat crawl through icy mud beneath barbed wire than you are thrown into the 'Torture Chamber': a series of underground tunnels with live electric wires dangling from the ceiling.

Here again come the screams. Again, not just of pain, but of fear. People contort themselves into positions a trained yogi would blanche at just to avoid another jolt but the wires are too close together and every twist and turn just pushes you into another exposed cable and another cursing convulsion. Every time I get one, I look around to see who kicked me.

By the time one of the marshals tells me I'm 'nearly there' I realise that my jaw is aching from how long my teeth have been chattering and I am looking forward to the finishing line more than any race I've ever entered. I have no concept of how long I've been out here, all I know is that I want it to stop.

And all of a sudden, it has. I'm aware that someone is cutting my timing chip off my foot, a reassuringly heavy brass medal has been hung around my neck and a large green plastic sheet is being wrapped around my shoulders. I feel numb in more ways than one.

It is only half an hour later, at the home of a friend's parents who live conveniently around the corner, that I allow myself to reflect on what has just happened. I stand in their shower, watching the mud disappear down the plughole and gritting my teeth against the pain of circulation returning to my feet and find myself thinking, 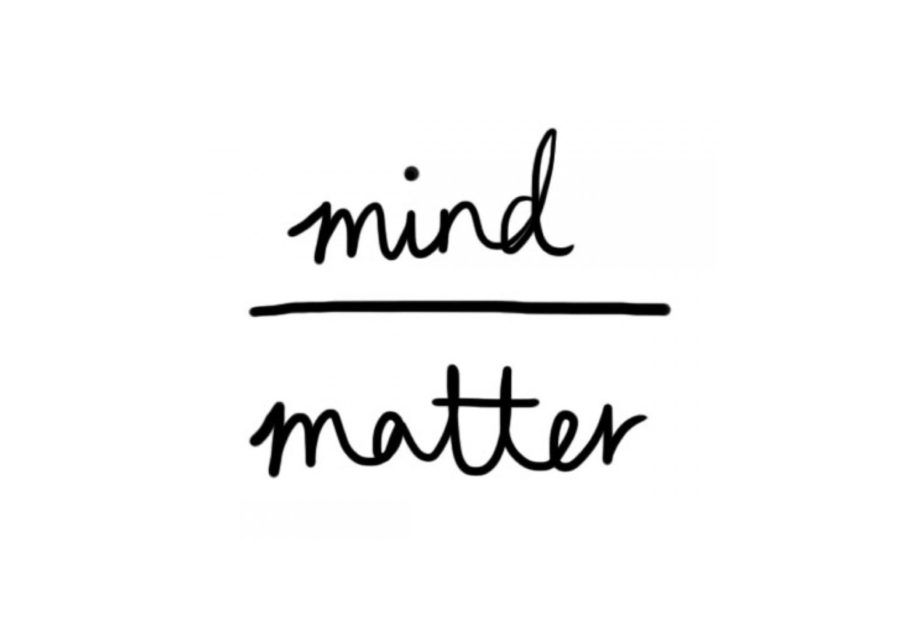 We all lose our training mojo sometimes. Even the pro&#039;s have days when they just can&#039;t be bothered. So how do you get out of the rut? Here are some ideas: